Sunday Bulletin Board: Would you prefer a beef on weck, or a beef in a Weck?  How about a weck in a Weck?

RUSTY of St. Paul: “I experienced what I believe to be a variant of the Baader-Meinhof Phenomenon today.

“I was reading a food story in the Times about Buffalo Wings. In the comments section, several readers from Buffalo, N.Y., spoke of loving ‘beef on weck.’

“Food is my hobby, I am well versed and well waisted in it. I had never heard of ‘weck.’ I was in Buffalo decades ago, when I was 14. My Great-Uncle Tom taught me how to swing a chipping wedge, but he didn’t take me out for beef on weck.

“Wikipedia told me: ‘A “beef on weck” is a sandwich found primarily in Western New York State, particularly in the vicinity of Buffalo. It is made with roast beef on a kummelweck roll, a roll that is topped with kosher salt and caraway seeds.’

“Maybe an hour later, I was caramelizing onions to make French onion soup. I needed a spoon rest out of the cupboard. I didn’t notice a round clear glass object sitting in it. When I grabbed the spoon rest, the glass piece flew out and hit the floor. I was able to deflect the strike with my foot, and the glass didn’t break.

“It did not look familiar to me. It appeared to be a glass lid for a glass jar. On the top, stamped in the glass, was ‘WECK,’ and along the curved edge was ‘Rundrand-Glas 80.’ Never heard of this. Hopping online again, I learned that Weck is a brand name for a line of canning jars and glass storage jars made in Germany.

“So weck the roll for a sandwich and Weck the brand name for glass jars. Same name, one proper. I have never heard of either, but they are not one and the same.

BULLETIN BOARD SAYS: That’s no B-M. Not even a B-M variant.

But it’s a fine Joy of Juxtaposition.

(Sorry if we wecked your fun.)

Vertically Challenged: “Awhile back, when this category started, I sent in the pic below of what seemed to be cookie cutters, which I had picked up at a garage sale. They’re odd little shapes that looked like they were meant to be put together. I asked if anyone knew what they were. 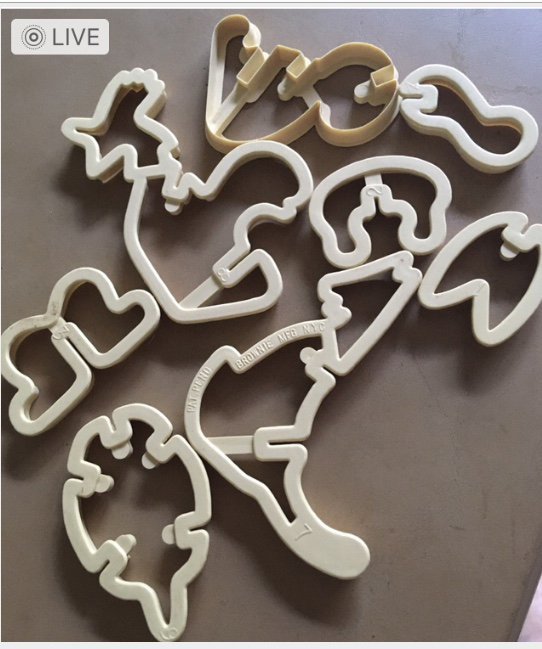 “Well, today I answered my own question. I was organizing and cleaning and ran across the little instruction pamphlet that had become separated from this box! 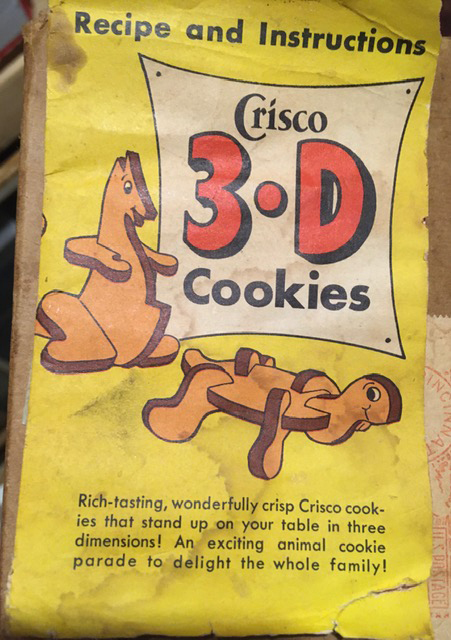 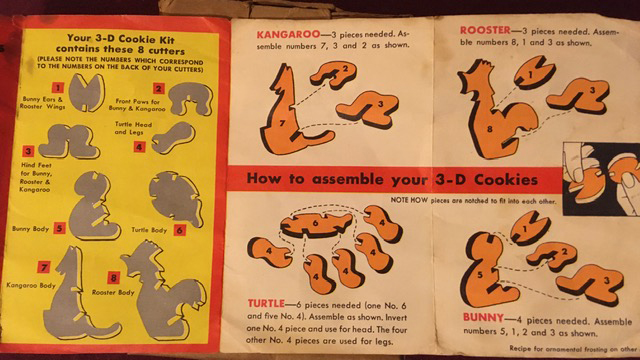 “Now all I have to do is figure out how to put these pieces back in the box so they fit!”

Our birds, ourselves (responsorial)

DEBK of Rosemount: “When the dogs and I awoke this morning, the barn thermometer read -20 degrees, offering meteorological confirmation of an existential chill that settled over our farm neighborhood a couple of weeks ago, when the weather was still comparatively balmy. The arrival of that cold front coincided with the appearance in BB of a terrific photo of a pair of pileated woodpeckers, lunching at a feeder. Taxman and I have often enjoyed watching our own pileateds, Lucille and Ricky,  sharing a meal. It’s a thrill that never grows old — and one we miss when it’s absent, as it has been since just about the time that BB photo came to our inbox.

“I was the first to see the photo, and as is my wont, I leapt to the conclusion that one of our own BB community had taken wrongful possession of our birds. In due course, Taxman investigated my allegations and determined that the woodpeckers featured in the BB post were not from our neck of the woods.  Kissing cousins of our birds, perhaps, but no more than that.

“Having done what he could to settle my ruffled feathers, Taxman spent the remainder of the day cutting wood at the Inventor’s place, down the road a quarter-mile or so. Taxman isn’t in the same lumberjack league as Inventor, who has heated his home and outbuildings with wood for decades. After five or six hours, Taxman raised the white flag and dragged himself home. He hardly had strength to report that Inventor and his wife have recently taken up bird-feeding. Over the roar of the chainsaws, Inventor boasted that the feeders he built are regularly visited by a pair of pileated woodpeckers.

“P.S. On an unrelated note, I have been (ahem) awash in memories triggered by recent recollections  of laundry days of yore.  My mom washed on Saturdays, when we kids would be around to assist with the carrying of water — into the house and back out — and with the sorting and soaking and wringing and hanging. Dad assisted rarely, and only in a supervisory capacity. He did, however, draw from the miseries of the process a punchy expression he trotted out whenever one of his progeny seemed bent on doing something stupid: ‘Don’t get your tit in a wringer, kid.’”

“Weather must have prevented restocking by those sticky-fingered, rookie bird-feeders about whom I just wrote. Ricky the woodpecker is having his fill at our suet feeder at this very moment, after an absence of at least three weeks. BTW, I think he’s gained weight. Inventor must feed a pumped-up suet.”

Another episode of creative hearing, reported by FRIENDLY BOB of Fridley: “I caught part of a commercial on TV the other day that at first had me scratching my head: ‘If you have such-and-such symptoms, call your doctor in Italy.’

“Turns out it was ‘call your doctor immediately.’”

The verbing of America

CHERIE D of Inver Grove Heights: “I was emailing with my cousin Gregory J. of Dayton’s Bluff about a new creative venture of his. I said: ‘Yes, please do consider BB-ing the story and photos of your new hobby!’”

DONALD: “An article (‘Poet Gorman on Super Bowl stage’) on Page 7A of Monday’s Pioneer Press includes this paragraph: ‘[Amanda] Gorman, previously the country’s first National Youth Laureate, was the youngest person to ever recite a poem at the U.S. presidential inauguration. Her reading of ”The Hill We Climb” at the Capitol immediately became a sensation. An illustrated book of the poem quickly zoomed to the top of bestseller lists. Shortly after the inauguration, she signed with IMG Models. This week, she covers Time Magazine, in an interview conducted by Michelle Obama.’”

BULLETIN BOARD SAYS: That is the worst verbing in years.

ZOO LOU of St. Paul: “Subject: Walter and the Whip

“Walter Matthau has always been one of my favorite actors. I mean, how could you not be charmed by a man with that omnipresent hangdog, beleaguered expression who delighted in perpetuating the myth that his real name was Walter Matuschanskayasky?

“Matthau, however, was anything but endearing when he played a mean, whip-cracking bully named Bodine in ‘The Kentuckian’ (1955), his first movie role. This character was as far removed from Matthau’s lovable curmudgeons in such films as ‘The Odd Couple’ and ‘Grumpy Old Men’ as Simon Legree was from Mary Poppins.

“In a rousing fight scene, Matthau is slicing star Burt Lancaster apart with his bullwhip, at one point snarling: ‘Next I go for the eyes!’ When a bloodied Lancaster finally gets the upper hand, I was never so happy, I’m sorry to say, to see a man beat to a pulp, even if it was the future Oscar Madison and grumpy old Max Goldman.

“Matthau finally gets his comeuppance when a vicious, cold-blooded backwoodsman, played by Douglas Spencer, bashes his head with a rifle butt because a reluctant (and scared) Matthau won’t kill a man. But I got no satisfaction out of that.

“Ironically, I just saw Spencer in the western classic ‘Shane,’ where he played a kindly farmer nicknamed Swede. At a wedding anniversary, Spencer announces with a big grin: ‘This is the day Joe Starrett got hooked, by golly!’ Quite a contrast to the murderous woodsman with the icy stare.

“It’s interesting to note that at age 11, Matthau claims he beat up Rocky Graziano, who would become middleweight boxing champ of the world. But like his ‘real’ last name, Matthau was known to make many dubious claims with a straight face.

“It’s also interesting to note that the double for Matthau in the long shots of the big fight was whip expert Whip Wilson, who cut Lancaster across the shoulder after Burt told him to ‘hit me and make it look good.’ So when Lancaster, who also directed the movie, shouted ‘Cut!’ at the end of that scene, he really meant it.”

All from AL B of Hartland: (1) “A blue jay flew in to the feeder, selected a peanut in the shell and flew to a tree. It flew back to the feeder with the peanut still in its bill. It dropped the goober onto the feeder and took another peanut more to its liking. I don’t think I’ve ever had a bird return food before. I suppose the best-if-used-by date of the peanut had expired.”

(2) “My morning started out with a shower. I hoped to clear the cobwebs from my mind. The invigorating stream of water hadn’t been hitting me for long before I noticed I wasn’t alone in the shower. What does a spider think when it finds a man in its shower? I can only know what I think and did. I said: ‘Good morning, spider, I hope you’ll have a pleasant day.’”

(3) “I noticed my shirt was a bit askew. Why should it be normal? I had buttoned it wrong. By then, I was out where people could see me on a warm January day. I had dressed in the dark. That’s my lame excuse, and I’m sticking with it. I had to decide which was the thing I wanted to do the least: taking the time to rebutton, or to look like a dork. I’d look like a dork whether or not my buttons found the proper buttonholes, and I needed to impress no one, so I greeted the world with my shirt off-kilter. I’m no worse for the experience.”

The sign on the road to the cemetery said ‘Dead End’

Electronic Board of the Church on Lexington in Shoreview Division

Our Official Electronic Board of the Church on Lexington in Shoreview Monitor — RED’S OFFSPRING, north of St. Paul — reports: “Subject: Good advice.

“The most recent message on the electronic board of the church on Lexington in Shoreview reads:

THE RETIRED PEDAGOGUE of Arden Hills: “Subject: Where there’s a rodent, there’s a Will.

“During a family Zoom, my wife mentioned that our neighbors had discovered a shrew in their basement,

“Without missing a beat, her younger son inquired: ‘Was it tame?’”

“My church meets online via Zoom, nowadays. Many of the songs are solos, since the technology adds time lags between singers or speakers. Overcoming it takes expensive equipment and/or lots of patience.

“Some of my fellow parishioners can’t wait for more group singing. I can’t wait until we meet in person and watch the children’s choir sing. And I want us back doing a circle dance to ‘The Bells of Norwich,’ which I’ve described before. To me it symbolizes joy and fun, and faith in the coming of Spring.

“Even in a pandemic— and especially in church — we can keep our spirits up.”

Life as we know it

Or: Could be verse!

From EOS: “Hope is that little place deep in your heart,

“where all your dreams live when you’re falling apart.”

Your stories and photographs are welcome here: bb.onward@gmail.com